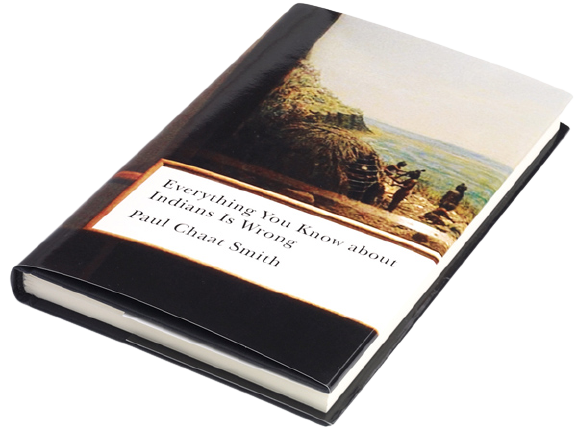 Everything You Know About Indians Is Wrong

"If Paul Chaat Smith ever needs another job—he's currently a curator at the National Museum of the American Indian—he would make an excellent stand-up comic. Unexpectedly, his latest book is a funny and painful collection of essays about a deeply serious subject: the ways in which Indian stereotypes infiltrate culture, damaging Indians and non-Indians alike."

Everything You Know about Indians Is Wrong is a highly entertaining and, at times, searing critique of the deeply disputed role of American Indians in the United States. Smith walks a tightrope between comforting and dangerous, offering unrepentant skepticism and, ultimately, empathy: “This book is called Everything You Know about Indians Is Wrong, but it’s a book title, folks, not to be taken literally. Of course I don’t mean everything, just most things. And ‘you’ really means we, as in all of us.”
(Read More)

This book, as you’ve figured out, is a collection of essays. The oldest was written in 1992, at the end of the first Bush administration; the newest (this one) is being written in the final months of the third. My obsessions haven’t changed much: I continue to find buried history, pop music, failed revolution, television, and futures that never quite arrived subjects of endless interest. But the truth is, I’m not really the same guy who wrote these essays. Are you the same person you were in 1992? I hope not, especially if you’re nineteen.
(Read More)

Reviews for Everything You Know About Indians Is Wrong

“
Non-natives charmed by The Education of Little Tree, Dances with Wolves, The Last of the Mohicans, and Thunderheart, for starters, might find in Paul Chaat Smith's Everything You Know about Indians Is Wrong a bracing wake-up call.
”
- Washington Post
“
The book is a nice, wild ride on Smith’s stream of consciousness as he shares his stories of an aching, but thankful heart.
”
- Cherokee One Feather
“
A satisfyingly complex book… (that) maintains that although we are considered somehow primitive and simple we are actually oceans of terrifying complexity. …A recommendation with many stars after it.
”
- Louise Erdrich, Birchbark Books
Click Here to Read More Reviews
Paul Chaat Smith